We made it to Canada. We spent our first night in Syracuse NY. Before we arrived there, we stopped at a park in a city about an hour away from Syracuse. Jaide found some friends to play with and we discovered a big furry caterpillar.
Wednesday we actually crossed the border. We couldn't check into the hotel until 4pm and Bob had to go work, so Jaide and I went to a small animal farm. Of course we left the camera in the car, but I did take some pictures from the parking lot before we left. Jaide seemed to be more interested in the playground like parts of the farm than the actual animals. She also enjoyed the little train ride.

While we were there Jaide told me several times we needed to go to Canada. "We're already in Canada." I kept telling her. I pointed out the Canadian flag a few times when we happened to see one. Today she told me, "that's not a flag!" Not even three and she's already an obnoxious American traveler.

After we left the animal farm we still had time to kill so we found the Ikea store I had seen from the highway. It was a small Ikea in a strip mall. Some things were more expensive but some were the same price as they are at home. All we ended up buying though was a frozen yogurt cone (we did still have all the luggage in the car). We also walked over to the Michaels store (it was next door to Ikea). They had baskets on sale in bins outside of the store. The price tags all had their top portions which have the US prices on them ripped off. Maybe that makes people feel better or something.

One thing that has been a little disconcerting is all of the French language around here. The signs all have English and French. (Not to mention all the kilometers and meters, oh and the temperature in Celsius- summer weather in the 20's?) French seems very different from Spanish, at least to me. We've encountered some French speaking children in our outings and Jaide tried talking to some. They just kind of looked at her funny.

There was a little girl at the farm wearing a Canadian Idol hat. I guess that show is starting a new season soon.
There are a few TV stations from Detroit on our hotel TV (the weather report was what tipped me off)
Apparently the Ottawa Senators hockey team is in the Stanley Cup play-offs. We've seen a lot of their fan paraphernalia around. Bob said there was a story in the paper about how people in Los Angeles don't really care that their team is in the finals (and actually beating the Sens 2 games to 0). I guess they thought that was weird.
We went to the grocery store today and saw milk in bags and no shredded cheese.
I saw ketchup flavored lays potato chips in a vending machine. 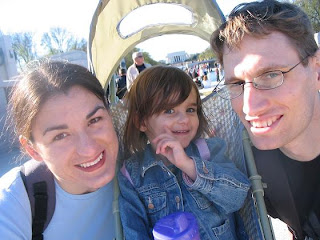 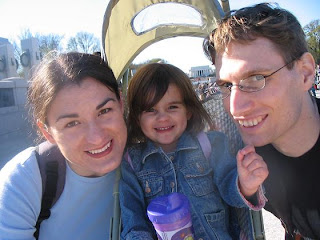 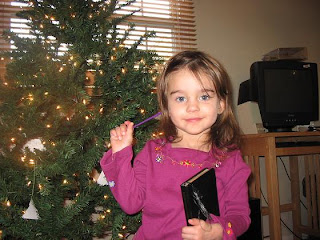 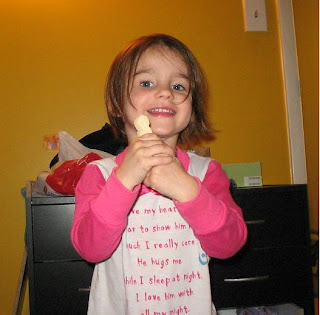 The first two pictures were taken the day after Thanksgiving at the World War II Monument in DC. The one of Jaide in front of the tree was also around that time. The last one I took after we got Jaide's hair cut. We haven't taken a lot of pictures since we got her hair cut. Her hair was wet in that picture, I think it usually looks a lot cuter. Maybe we'll have some cute pictures from our trip.
Posted by Meg at 11:22 AM 1 comments

Today the last hour of church was canceled because the toilets backed up. Jaide was very, very sad to have to leave nursery early (before snacks! the horror!). So we had extra time to get dinner ready- we invited a new family in the ward over for dinner. More accurately, Bob worked on dinner and I worked on RS secretary stuff. I gotta get those numbers in before the 5th of the month and we're fleeing the country on Tuesday.
Jaide was really excited to have some kids to play with tonight. So much so that she really didn't eat dinner- at least not until the kids went home.
Jaide has a lot to be excited about lately. We're going to Canada on Tuesday. That's one of her new favorite words- "Canada!" She's also excited about "baby." She's practicing with her baby dolls for when her little brother or sister comes in November. "Mommy, I think baby's poopy. Mommy, baby is very hungry." We rented a doppler thing to listen to the baby's heartbeat and helping me use it is one of Jaide's favorite bribes. "We gotta listen to baby's heartbeap!" she says. She presses the button to turn it on and proudly proclaims, "we did it!" every time we finish.
I'm 15 weeks along today if you trust early ultrasounds. The most recent ones I had would put me about 10 days farther on, as would my own calculations. I guess we'll see when the squeakuel decides to come. This hasn't been an easy pregnancy (not that any of mine would really be) but things seem to be going a lot better now than they were. We'll see on June 28th if the placenta has moved up to a better location and also if we're having a boy or a girl. We'll also celebrate our 5th anniversary. Yay for us!
Posted by Meg at 10:46 PM 5 comments