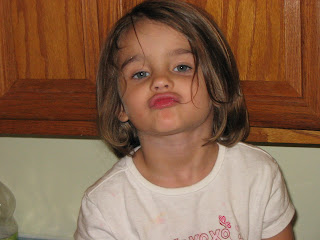 Drs Appt
This morning I had my doctor appointment. It was super fast. But I did ask if they planned to induce me and the doctor said probably about a week before my due date. I'm not sure exactly when that will happen as my "official" due date is a Sunday and Monday before is Veteran's Day Observed. The doctor was fine with the ultrasound I had done last week even though it didn't look at the blood flow, I guess since the baby is measuring normally. I hit my "high" weight today (10ish weeks earlier than with Jaide *sigh*). I seriously considered not looking at the scale any more starting with this appointment, but I decided I'd rather know.

Shopping is a Constant
Despite my recent string of not very fun shopping expeditions I headed back into the fray again today. Jaide was actually pretty good. I've been trying hard to listen to her, pay attention to her, and talk to her in the car. Things have been going pretty well with that. We went to BJs for some food (she really likes going there and I don't even know why, they don't really have toys...) Then we headed over to Walmart because I wanted to buy an aquarium and I thought they'd probably have the best price. I also wanted to get something to add to my little bags of baby shower gifts for various people. I got what I came for there and without too much problem from Jaide. She was excited about the fish tank.
Then we headed over to Petco because Jaide wanted to. I kind of wanted to check out that store too. I'm completely unimpressed with Petsmart and their dirty tanks full of dead and dying fish. Petco had a bathroom so stinky Jaide even said something about it. But the fish seemed better. We'll probably get fish at the place at the mall though. They seem to be the best taken care of.
At Petco they had a few cats that needed to be adopted. Jaide kept asking me if we could get a cat. I told her daddy would not be happy if we got a cat. I certainly didn't want to pay $80 for one (plus a bunch more for all the accessories). We also enjoyed watching two little white mice run in two wheels. They seemed to be trying to impress us. They'd run really fast and then stop and hold on and try to get the wheel to turn them upside down. One actually made it all the way around the wheel.

that's pretty cool about the mice. i don't think i've ever seen anything like that. :)

Don't worry about your weight. It'll come off with all the running around you'll be doing with two young ones. I got to 199.7 with Alec. But it wasn't 200!
So relax and go eat something.