I wanted to write down what all I did for Jaide's birthday party, so feel free to skip, skim, or read.

Jaide wanted to have a Mystery Inc./ Scooby Doo birthday party. I took some ideas from the internet and made up a few of my own.
Invite: I used a 60's looking evite pattern and added a picture of the Mystery Inc gang. I wrote,

Calling all meddling kids! Come join us at Jaide's mysterious 5th birthday party. Help Scooby and the Mystery Inc. gang solve the mystery. We will have some of Scooby and Shaggy's favorite foods for lunch since we can't solve a mystery on an empty stomach! We'll play games, look for clues, and have birthday cake.

At the party we had banners 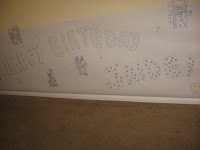 and color pages (google Scooby Doo Coloring pages) on the wall to color as kids arrived. We also played a Scooby Doo video so everyone would be somewhat familiar with Scooby Doo if they weren't already. Then we had lunch.
Food: 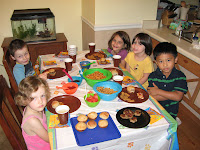 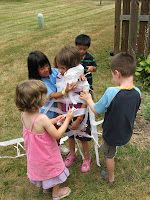 Wrap the mummy with crepe paper. Every one wanted to be wrapped up, but then didn't like being wrapped up once they were. We also played tag for a bit and let the kids run around with trailing crepe paper. 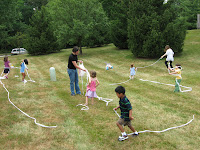 After the games we went inside 'for cake' except the cake was gone. That was the start of our mystery.
Mystery: The Silly Pirate was our villan. He stole the cake, but left a clue that mentioned his friend 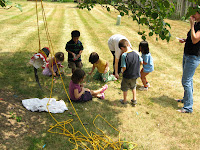 Pinata Pete. We all went outside to hit the pirate pinata we had filled with candy and the next clue. The next clue led to 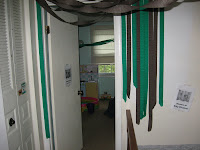 "Pirate Bay" which was set up in the girls' bedroom. The kids found a treasure chest 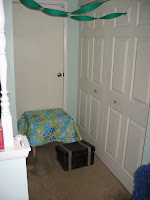 that had the next clue. It led to the "Spooky Basement" which had balloon 'ghosts' that the kids had to pop 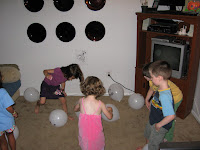 to find the next clue. The last clue was a note from the Mystery Inc. gang. It said it was time to set a trap, but that first we had to feed Scooby and Shaggy so that they would agree to be bait for the villan. We went to the living room and played the 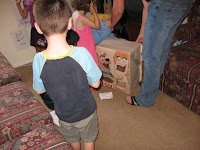 bean bag toss game that I had made (the bean bags had clip art pictures of different kinds of food on them). Then we left Shaggy and Scooby as bait and hid under a big white sheet. When the Silly Pirate (aka daddy) came into the living room and went after Shaggy and Scooby, all of us threw the sheet over him. Then we unmasked him and he told us where the cake was (in the refridgerator!)
Lastly, we had cake. 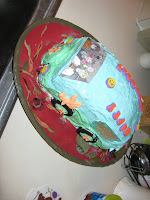 I used two loaf pans to try to make a 3D mystery machine. I used Oreos for the tires and the spare in the front. I'm not a very good artist in the medium of frosting, so I printed out some stuff on cardstock to stick on the cake. I got a Scooby Doo cake topper set, from which I used the candy letters, tags, and peace signs. We also found a Scooby Doo candle on clearance at the grocery store. 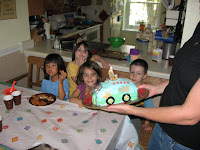 Goody Bags: I used clear cello bags I already had for goody bags. I printed out small Mystery Inc color pages on which I'd typed "A goody bag for you from Scooby Doo!" to put inside the bags. I got mini key chain flashlights, little plastic magnifying glasses, Scooby Doo stickers, and 'tie dye' slap bracelets from Oriental Trading Company. I also added a pouch of Scooby Doo fruit snacks to each bag. I used the slap bracelets to close up the bags.

What I had wanted to do, but didn't: I wanted to have a find Velma's glasses game. Velma always loses her glasses and can't see to find them. We probably should have done that in Pirate Bay, since we didn't have a game at that stop in the mystery. I thought of using a random old pair of glasses, but I think finding some big, black, toy, plastic glasses to hide would have been better.
I wanted to make Pirate Bay out in the back yard with a teeny blow up pool (that ended up empty in the girls room) and a bunch of play sand but the weather reports kept saying high chance of thunderstorms that day. Fortunately it didn't actually rain, so we at least played some games and did the pinata outside! 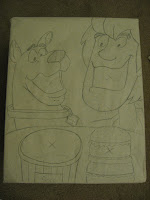 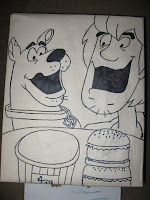 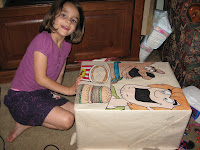 An Interview with a Five Year Old 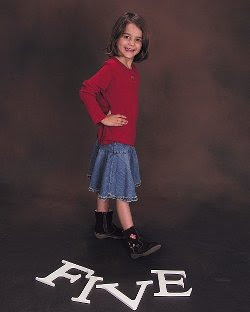 Jaide had a birthday this week. On a rainy Thursday afternoon, I sat down with her to find out what she thinks about life, love, and the big oh-five. Jaide was wearing a navy blue Carter's top and shorts from Old Navy. Pink Dora croc-style shoes completed her ensemble.

Meg: So Jaide, congratulations on turning five.
Jaide: thanks
M: How was your birthday? 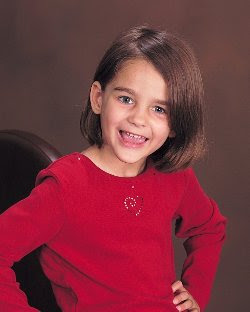 J: Good
M: Do you feel older?
J: Yes, I feel older.
M: What are you looking forward to most now that you're five?
J: Going to kindergarten.
M: Are you excited to take the bus?
J: yeah
M: Do you think you'll make new friends?
J: yeah
M: What do you think will be your favorite part of kindergarten?
J: arts and crafts time!
M: Tell me about your birthday.
J: my birthday was fun (trails off)
M: who's your best friend?
J: Megan
cause we always like how we play but sometimes we have a little problem like Kaya hitting us.
M: What's your favorite thing to do
J: color... and watch [tv]
M: Do you want to be an artist?
J: I want to be a mom that do-is artist things.
M:What do you think we will we do while you're at school?
J: You will, uh, watch tv. You will, play bean bag toss, and watch dora and play with the blow up hammer... (trails off again)
M: Are you going to be sad or happy at school?
J: I'll be sad, but I know from the book that when it's my first day of kindergarten, the girl from the book made a thing like her mommy.
M: What do you love?
J: I love mommy
M: any body else? 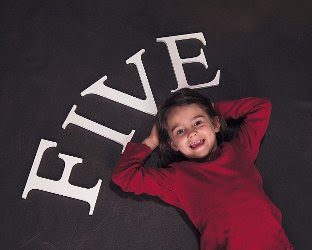 J: and Megan
M: How about Kiree and daddy?
J: yes, I love them too. I like Scooby Doo, I love coloring. I love Kristina.
M: Do you like making friends?
J: Yes. Mommy, I really want to watch Dora.
When we didn't watch Dora, Jaide became engrossed in coloring with her rainbow crayon, a prize from the library.
J: Look mommy, a rainbow!
Posted by Meg at 11:33 AM 6 comments

The girls and I went to Chick-fil-A for dinner tonight. After dinner, we had to go play in the play area (of course!) This was the first time Kiree ever tried to get up into the big play area thing. She got to the third tier and just couldn't reach the fourth. She's a little shorty :) It was interesting to see the difference though between how she acted and how Jaide used to act in these fast food play areas when she was around Kiree's age. You can tell Kiree has a big sibling. She doesn't seem to mind much if the other kids knock into her or push her aside. Her temperment is a bit more easy going than Jaide's too, so that might also be part of it. She didn't get upset that she couldn't get up any higher than she did. She just enjoyed getting up and back down and running back and forth.
Jaide used to get very frustrated when she couldn't get up into the high play areas. She wanted me to take her up inside. Bob did take her up in at least one of them one time. Then Jaide got to the point where she'd get half way up by herself and freak out. Then either I or some other nice person would have to retrieve her. I don't know if Kiree will go through some of that later on. But one thing that is pretty handy is that she'll have a big sister to help her out. Yay! No more of me having to squeeze into a boxy tube full of alternating plastic triangles. 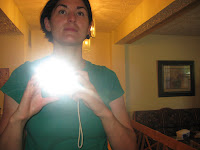 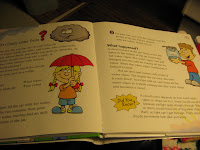 I'm a bit behind in blogging. July has turned into quite a busy month. Here's a little recap of what we've been doing.
We had water week two weeks ago. We did some fun activities including painting with water on the sidewalk, getting books from the library about water, and trying to make 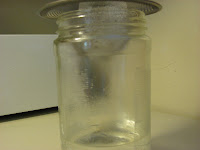 a cloud in a jar (didn't work as well as the picture in the book seemed to indicate). 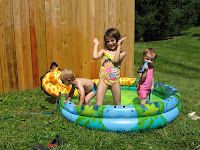 The highlight seemed to be getting out the inflatable pool and having a little pool party with Kiree's little buddy Frank and his mom. They're visiting home for a few weeks. They live in Germany nowadays. 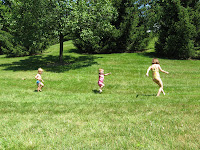 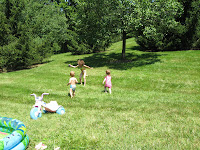 This past week was supposed to be cooking week, but it turned into animal week. Bob suggested cooking animals week, but I ended up being too lazy/not patient enough to actually do any cooking activities with the girls. *okay, not really lazy, more like busy doing other things and just not making time for it* We went to story time at the library on Monday and it was about elephants. Then we ended up going to the zoo with the second cousins. This picture is actually from when we went in May. 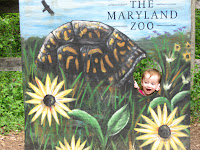 I didn't bring my camera this trip. We had great fun seeing all the animals, especially the elephant baby and a pond full of tadpoles. We didn't do all that much more for animal week after that. We did watch a Diego video, but um, yeah...
This week is going probably going to be cleaning up/manners week since we all need to get ready for a certain person's birthday. Housefairy is helping us out with that (and those manners books I checked out weeks ago from the library, hopefully). The girls cleaned up their room yesterday and are eagerly waiting for the Housefairy to check out their room and leave them a surprise.