This first paragraph was written last week and then ignored until now, I wanted to get the pictures up and I was busy. 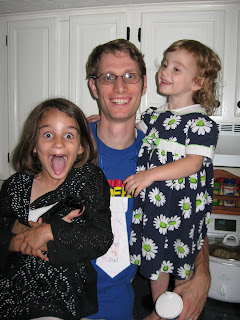 We had a good weekend and I hope Bob had a
good father's day. I think he did. The girls made him cards and pictures. I bought him a book and along with the girls we made him waffles for breakfast. I also made him a special dinner- pot roast in the crock pot. I helped make brownies for the men at church for father's day and I got to bring home two of the extras-sweet.
It's hard to believe Jaide's first year of elementary school is over!
On Monday we went to the kindergarten picnic. I volunteered to help with games and that was pretty fun. It reminded me of my volunteer days as a teenager and my first job at the zoo. The station I was at was a water balloon relay. Bob and Kiree went around with Jaide's group. They were the last group at my station. Then we went in with the kids for a little
bit and got some water in our water bottle. It was super hot out! Then we had a picnic lunch outside. Since I had so much stuff to bring and Bob was just meeting us at school, I forgot the camera. I was sad too that there were no pictures from the picnic in the school newsletter on Wednesday. Oh well. All the kindergarten classes lined up and sang songs to us at the end of the picnic. They were wearing their color-coded t-shirts from their zoo field trip and they looked like a rainbow.
Tuesday we picked Jaide up a little bit early from school and went to Six Flags with one of the guys Bob used to work with and his family. It was fun to visit the new kids area- Thomas Town. We didn't bring the camera. 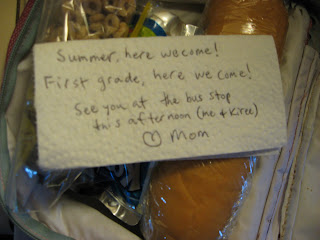 Disgustingly, I found the remains of this last school lunch in Jaide's lunch box just this evening.
Wednesday was the last day of school. Jaide was happy to ride the bus home, but sad that kindergarten was over. She told me she wished kindergarten never ended. She also told me that she wished
that first grade started the next day. We actually counted up how many days it would be until the first day of first grade but I've forgotten already.
I think Jaide is enjoying being home with Kiree although she's sad she hasn't gotten to go to kidspace at the gym yet.
Today even though we dragged the kids around to several boring places, they still got to get free samples at BJs, play at the play area at the mall, have icecream at the mall, and splash in the kiddie pool at home before bed. 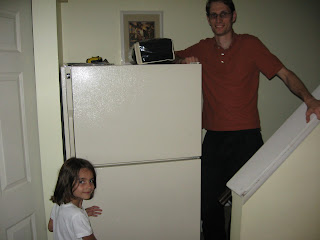 We finally got rid of the extra fridge Thursday evening! The counter tops are going next!
Posted by Meg at 5:01 PM 0 comments

J: I don't want to be called Jaide when I grow up.

K: the sun loves me.

Looking at the best buy ad sadly, K: i wish i had a phone.

K: i wonder if i got more pees in my butt.

M: (handing Kiree a calendar she'd kept asking to see) Here, knock your socks off. K: take my socks off! (as she takes them off)

M: How'd you sleep? K: i sleeped for long weeks. 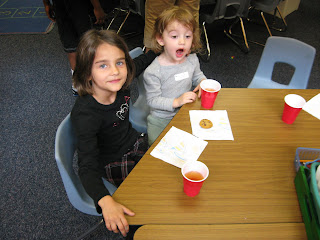 On Friday, Kiree and I got to go to the summer birthdays celebration at Jaide's school. Kiree was so excited to go to Jaide's class! The kids in Jaide's class were very excited to see Kiree! Kiree was quickly surrounded by kids and hugged by several. Another mom and I were helping with the party, getting the snacks served to the kids. 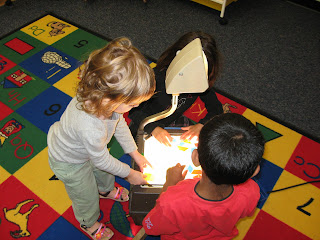 Kiree sat with Jaide and participated in the festivities. We sang to all eight kids who had birthdays June through August (all at once) After snacks, it was time to play! Jaide and one little boy played with the overhead projector and colorful transparent shapes. Kiree played with them for a while. 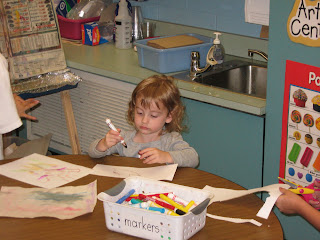 Then Kiree saw some other kids doing art. She joined them. Several kids drew pictures for her. 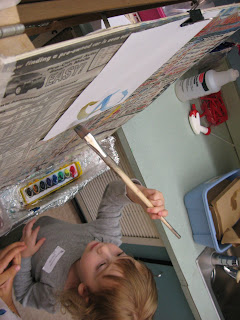 Two little girls helped Kiree paint and then play with play dough. Then it was time to clean up and get ready to go home. Jaide enjoyed getting to be a "car rider" for the first time going home from school. We played outside at home for awhile and Jaide got to watch her bus drop the other kids off a little while later. 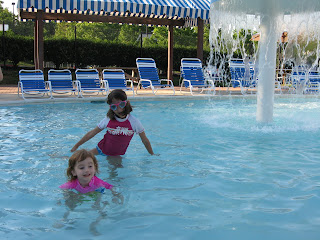 Friday night we packed up a picnic dinner and went to the outdoor pool for the first time this season. The girls were really excited and they even helped me get dinner packed up. It's really nice now that Kiree can walk the entire length of the baby pool confidently. 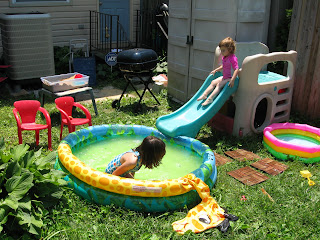 Saturday Bob and I had a lot of projects to work on around the house. The girls were bored (we're doing the fast from the world- ie no tv/videos/etc this month) and I needed to spray paint some stuff in the backyard anyway, so I set up the kiddie pools for the girls. The slide that came with the one pool never stays in very well anyway, so we set it up at the bottom of the plastic slide. 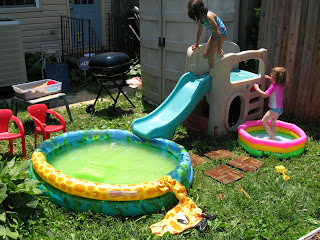 It was a good little set up. The girls enjoyed it very much. 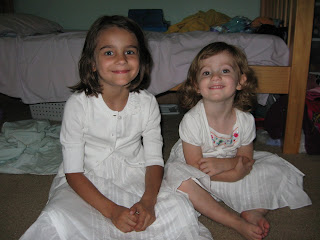 On Sunday the girls wore their matching dresses I bought this week at the Children's Place outlet. 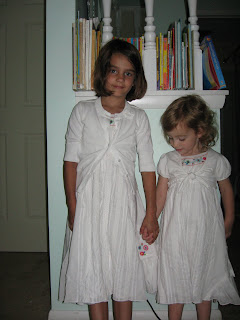 They were only $3.99 each and then I got an extra 20% off with a coupon! Swinging skirts are great for dancing! 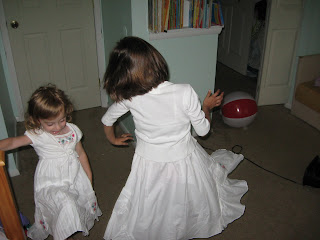 Memorial Day and Others 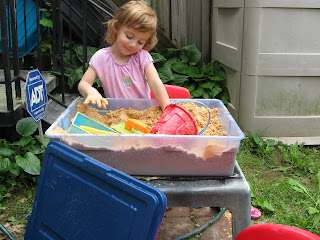 We had a fun Memorial Day. We went to Ikea for free breakfast and purchased a couple of small things. Then we went to the waterpark at Six Flags. It was hopping! We got to go on more rides with Jaide this year than we did the last time we had passes. Kiree can't go on much yet, but there are some fun water areas for her to play in too.
I had a flashback while we were in the kiddie area. Kiree climbed up into this play slide in the kiddie area and then got too scared to go down the water slide. When Jaide was little, she longed desperately to go up in every fast food play place we went to. But alas, she was too scared to scale the heights. (I don't blame her though, seriously, those things are high up off the ground. Back in my day we had low to the ground play things made of metal) Her fears of course, didn't fully materialize until she was stuck a couple of levels up into the thing. I had to rely on bigger kids and a shorter, more lithe mom or two to retrieve her more often than I'd like to admit. At least for Kiree stuck in the water slide thing, I could summon Jaide to help her out. Kiree was so freaked out though that Jaide had to physically pick her up and put her in her lap to go down the slide.
Jaide had her own chance to freak out when we went down one of the bigger slides. Instead of just putting her feet down in the water at the bottom, which was well below her neck, she tried frantically to swim and then just freaked out in flailing, sobbing, frenzy until I scooped her up. Sadly, I was frustrated and turned into "ugly mom." We didn't take another opportunity to go down that slide. Maybe next time.
In spite of the small freakouts, we had a pretty good time overall. We were ready to go after a few hours (the park was getting more and more crowded, they started filling parts of the parking lot I didn't even realize exsisted).
Then we headed home to barbeque. We invited some friends over to eat with us and afterward we played Monopoly Deal which was fun. I made funnel cakes for dessert.
I forgot to mention that on the Saturday before we bought a new fridge from Sears. It was on sale, rebate for delivery, $100 rebate for being very energy efficient, and I used $110 in gift cards I earned on mypoints for it. Plus it's a pretty inexpensive fridge to begin with. So I'm happy. It's a plain old white one and it'll be delivered next week. 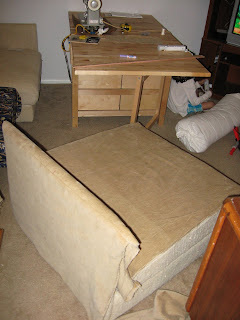 After being confused all week as to what day it was, we made it to this past weekend. Some of the highlights of the week included going to the Kids Workshop at Home Depot on Saturday, working on making slipcovers with Bob, murdering a wasp family and poisoning their home, finding a tick on Jaide before it had a chance to dig in and feast on her blood, buying more food storage, searching for Jaide's school library book so we don't have to buy it (still searching), Jaide attending her friend's birthday party and swimming in the bay, Bob participating in our friend's baby blessing, feeding the elders, getting clogged up plumbing working again, seeing for myself that there aren't any roots in our sewer line, field day at Jaide's school, and holding two little babies that aren't mine. 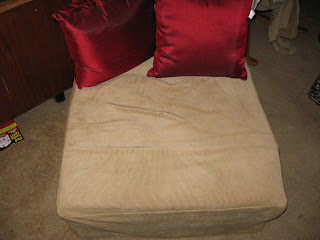 This week we have Jaide's second to last full week of school (her last day isn't until the 23rd (remember all that snow?) but there's no more homework. I get to volunteer in Jaide's class on Tuesday during reading time and Kiree and I will be helping out on Friday for the summer birthdays celebration. Bob is going to volunteer during math next week and then the last Monday of school we'll all go to the kindergarten picnic. Hard to believe kindergarten is almost over.
Posted by Meg at 3:38 PM 4 comments