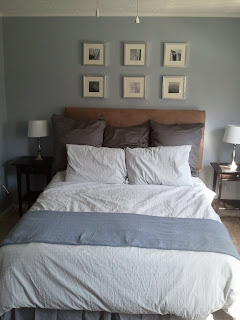 I promised Kathy (my sister) some pictures.
Here's our master bedroom. The only thing I still need to do in here is touch up the paint where the carpet installers dinged it and make the
bookshelf look pretty. 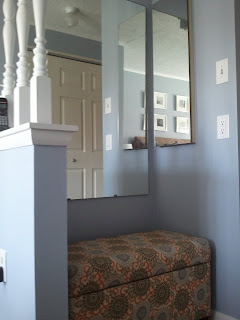 Here's our "dressing area." I got the storage ottoman from target.com.
The black chair we found at the thrift store one Saturday for just $17 (everything is 25% off on Saturday at the local Salvation Army). 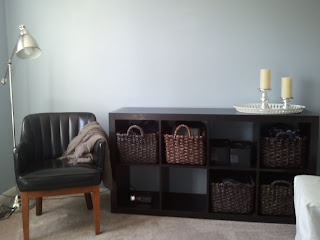 Yesterday I bought an inexpensive but highly rated upright vacuum and I filled up a bag (and the hose) with new carpet fuzz. Better that than stuck in Kiree's curls (as it has been), I say. 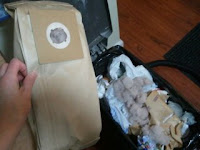 I had experience getting new carpet fuzz out of a clogged up vacuum when we visited my friend Amber last spring break at her new apartment, so it was no biggie. 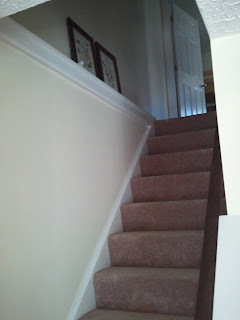 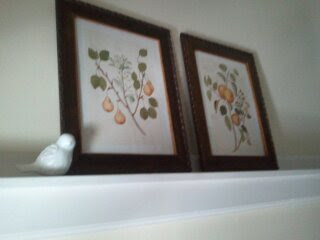 Today I finished caulking up the ledge I made. I'm trying to decide if I should paint these picture frames or not. I thought of painting them white, but they are kind of uneven (cheaply made) in the corners and I'm worried painting them might make that more obvious. What do you think?
Posted by Meg at 4:51 PM 7 comments 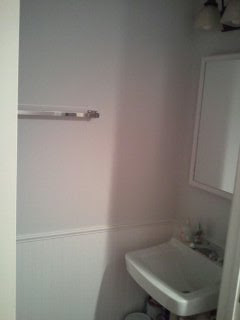 Man am I sick of painting stuff. Our to do list is growing shorter, but it's not done yet. This week I haven't been working nearly as hard because, well frankly, you can't keep such a crazy pace indefinitely. Kiree was sick last week. So was our plumbing system. Kiree had a bug or something. The sewer pipe had a couple roots. Both caused unpleasant back ups in their hosts. This weekend I seemed to have caught whatever Kiree did. And while I didn't literally 'get sick' I haven't had my usual energy, taste for food, or will to slog through my 'homework.' It hasn't stopped me from almost daily trying to sample some chocolate though and that has caused me regret pretty much each time. 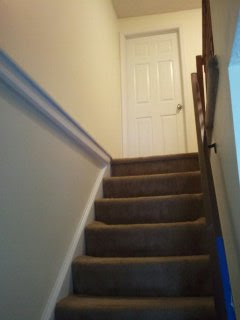 This week I'm also watching extra kids and thus not as able to bust out the sandpaper, paint, and caulk gun.
What we've got left is mostly little things for us to do. We finally got approval for our deck so now of course the people we got quotes from are all backlogged about 3 weeks out.
We got new carpet put in upstairs last Friday. Hopefully we can keep it looking good! 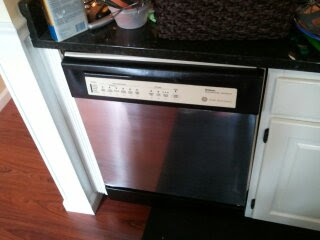 These pictures are a few I sent to our realtor to show her what we'd been up to. They're not the most recent. They are the powder room in the basement (we put in beadboard paneling and trimmed the mirror), the upstairs stairway (pre-new carpet, post me painting all the trim along the stairs, we also built that ledge and replaced that door), and the old dishwasher now with touched up black spray paint and previously mentioned faux metal contact paper*)
*I think it's actually duck brand shelf liner

A Blue Bathroom and other pictures of my Homework 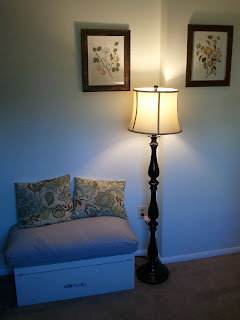 We decided to switch rooms with the girls again. We are back in the master bedroom and they're in the small room. I had an idea of what I wanted to do with the lighting in their room, but I had to try out every configuration. 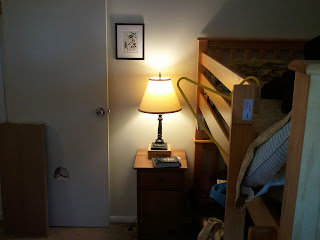 After moving almost everything around like five times, I realized I should have taken pictures so I could compare. So I went back through the process taking pictures. These pictures are from that process (that's why there's so much junk in the pictures) In the end I decided to go with my original plan. There's a nice before shot of the door to that room too (we replaced it on Saturday). 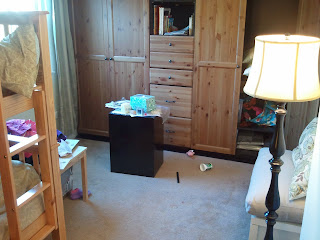 Besides the obvious cleaning and organizing, I just need to move the pictures and attach the skirt fabric to the bottom part of the bench. I also need to figure out how to fix that nice floor lamp I just bought at target since it's now leaning like crazy! 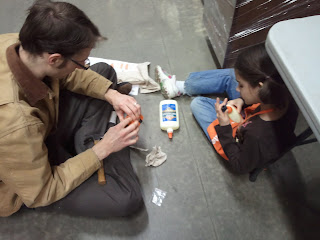 Saturday morning we went to the home depot kids workshop and made orange race cars. 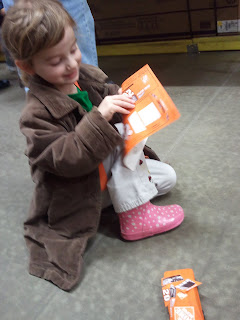 The kids were thrilled, especially since we've packed up so many of their toys already. 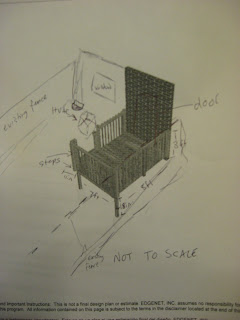 Here's a sketch of our deck plan for the backyard- just waiting for approval from the condo association. 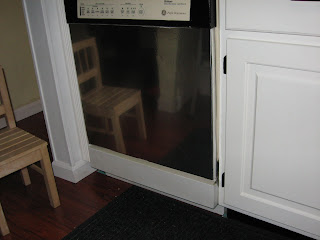 The dishwasher now has some faux metal contact paper and just needs a coat of black paint on the bottom pieces (and they come off- happy, happy, joy joy!) and a little touch up on the top. 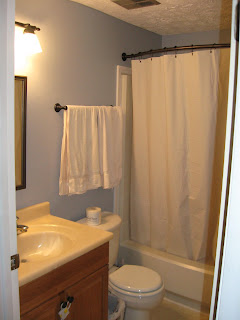 The bathroom is finished. I have a pretty hotel-ish fabric shower curtain I'm going to put up when we list the house and some nice towels that match them. They're both white with a brown line. It's hard to take a good picture of a bathroom! But I think it has turned out well and Bob doesn't think putting trim around the mirror/medicine cabinet is such a dumb idea any more. 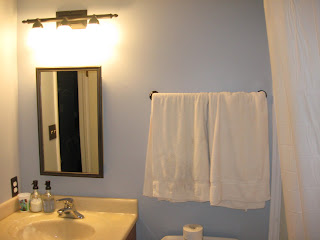 I spray painted the outlet covers with the same bronze paint as I used on the mirror trim. I wasn't sure if it would work, but they're cheap to replace, and I think they turned out just fine. I also spray painted the antique brass hooks that are on the wall behind the door too. Now every metal in there is either bronzey or silver. I neglected to get a picture of them today while I was taking pictures. I think our little cannon is on it's last rubber banded together leg. 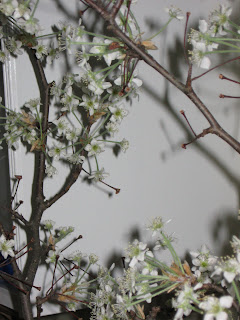 Spring has sprung in the kitchen! The branch I brought in now has flowers on it.
Posted by Meg at 5:10 PM 5 comments