It was spring break last week and yesterday.  It's been a nice break from school for Jaide but not a break from the craziness that is our life right now. 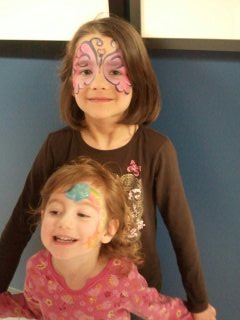 The first Saturday of spring break we went to the gym and it happened to be member day or something.  The girls got to get their faces painted which they thoroughly love to do.  The rest of the day people asked us if whatever place we happened to be at had face painting going on.  We went to an Easter thing at Toys R Us (the girls got to find stickers throughout the store and then got a "goody bag.")  Then we had lunch at Chick-fil-a over at the mall before going into the mall and buying Jaide some new sneakers.  Her old one's had a big hole in them.   Kiree got some Dora sneakers for future wearing as well (the striderite outlet had a buy one get one 50% off sale). 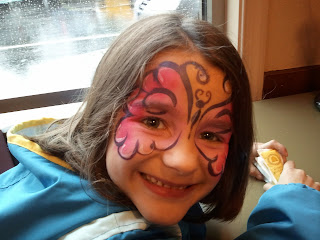 On Monday we went and saw the most gorgeous, awesome, perfect house.  By the time we finally let the realtor know we wanted to put in an offer on it, it was showing up as under contract as of Monday (the day we went and saw it! )  We had let our realtor know we wanted to go see it the day it came on the market (Friday) but she was out of town that weekend.  It is a short sale, so maybe things will fall through for the first people.  Who knows?  Monday was also the day our new dishwasher was to be delivered (the new new one).  It was supposed to come sometime between 2:15 and 4:15.  It came at nearly 5 which was also the time we were supposed to meet the realtor at that house.  Sigh.  Then later that day Bob installed it with much crankiness.  But all's well that ends well and this one works every time- unlike the last one that only did rinse cycle and didn't do any other cycle fully until we tried it one last time on Sunday night.
Tuesday we went to an Easter egg hunt at the home of one of our friends.  Despite some light rain, we were still able to have it outside.  I thought the realtor tour was supposed to be that day, but apparently it wasn't until today.  And this time I could tell that they actually did come.  So I guess we'll find out what they had to say at some point.
Thursday and Friday were our "vacation days."  We went to the pool at the gym in the morning.  Went to the temple after that and then headed south to Richmond.  We spent the night in Richmond before going to King's Dominion amusement park.  On the way there, we got rear ended.  The lady behind us some how lost control and hit us twice.  I think her car might have been stuck to ours when we pulled off but then it got free and careened off around us and for some distance in the grass.  We at first thought they were trying to make a break for it, but they did end up stopping.  We're still waiting on her insurance company to take care of our car. After I opened the trunk it would not close again.  I don't know how much longer will have the green car.

The End of our Troubles

We signed the papers to list our house a week ago today. So far we've had one showing, on Sunday during which time the next door neighbors who don't play loud music very often at all decided to blast it. It takes at least an hour and a half to leave the house in the morning- due to cleaning and setting things up *justincase* someone wants to come see it while we're gone. We turn the lights all on before we leave and turn most of them off when we're home. We're like reverse vampires! We had a small debacle with trying to replace our dishwasher. Don't buy a return, even if it's $300 off, just don't do it! It's going back on Monday when a new one will be delivered.
I guess I'm kinda naive. I thought when we finally got the house listed, I'd be done. I'd have all this free time on my hands. Hasn't happened yet. Maybe next week. Hope springs eternal! I guess like the saying goes, I didn't know which end.
Posted by Meg at 10:38 AM 3 comments

March the Month in Review (Besides That) 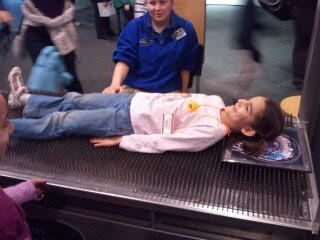 All my posts lately have been about the house. This is probably because that's what's been on my mind and my to do list for a long time now. We did do some other stuff in March (I had to consult the my pictures folder to be sure). Here is some of that.
I finally got to be a
chaperon for one of Jaide's field trips.
We went to the Maryland Science Center. 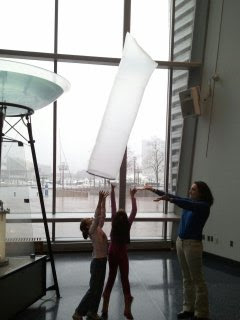 I took Kiree to her friend's birthday party (she was so excited about
it!) Kiree got to take a turn whacking the Cinderella pinata. 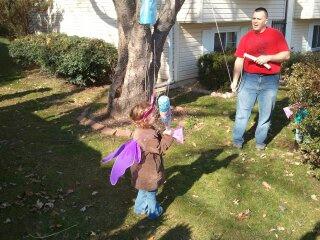 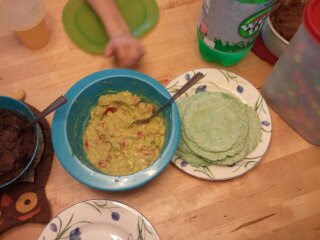 And we decided to go with rainbow colored dessert- peanut m&m's. 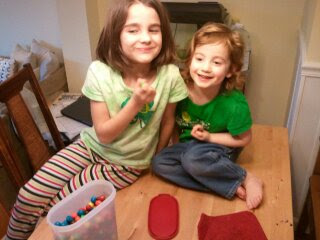 Last weekend, we went to one of the local high schools to see a few of the kids from our ward (some that have babysat the girls) in the Sound of Music. One of the girls in our ward was Maria. When she came out at the beginning of the play, both the girls asked if she was Belle. Kiree said, "she's so beautiful."
Jaide really enjoyed the play. Kiree fell asleep before intermission. 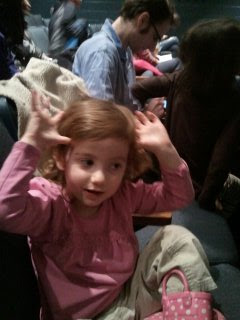 The girls were very interested in seeing the movie so we got it from netflix on Wednesday. I had never watched the whole movie before. It has some catchy songs.
Kiree strikes a pose before the play
I almost forgot the most important development of the month! Kiree is potty trained!!! Woo Hoo!!
On Monday, I decided that we'd just try wearing undies to kidspace at the gym. She can hold it long enough for me to workout. She was so excited to be a big girl and play in the big girl area that she wanted to keep wearing undies. I took her potty before we left and then again when we got there. We stopped at the store and she went potty there after the gym. We got home and then I got distracted bringing stuff in and then the UPS guy came and she had an accident. We didn't give up though. She had three accidents the first day. Tuesday she wanted to go back to the gym. I told her if she had fewer accidents than the day before she would get 10 legos (in addition to all the m&m's she gets for going potty). She only had one accident on Tuesday. Wednesday we stayed home to work on #2 (since she'd gone in her undies Monday and hadn't gone at all Tuesday). After she went in the potty we celebrated and ran a couple errands. Since Tuesday she hasn't had any accidents. She's even been dry two out of the last three nights (we still put a diaper on for bed). We're so proud of Kiree! She is a big girl. She got to go to gym and swim at the gym on Thursday (she even waited to pee until after going swimming!) She also got to go to Smaland at Ikea with Jaide on Friday (it was a half day of school). Kiree is also going to get a mini-pillow pet. When Kiree is totally potty trained at night we'll have to have a party for her (we made a lot of promises lo this last year+ of potty training).
Posted by Meg at 10:07 AM 1 comments